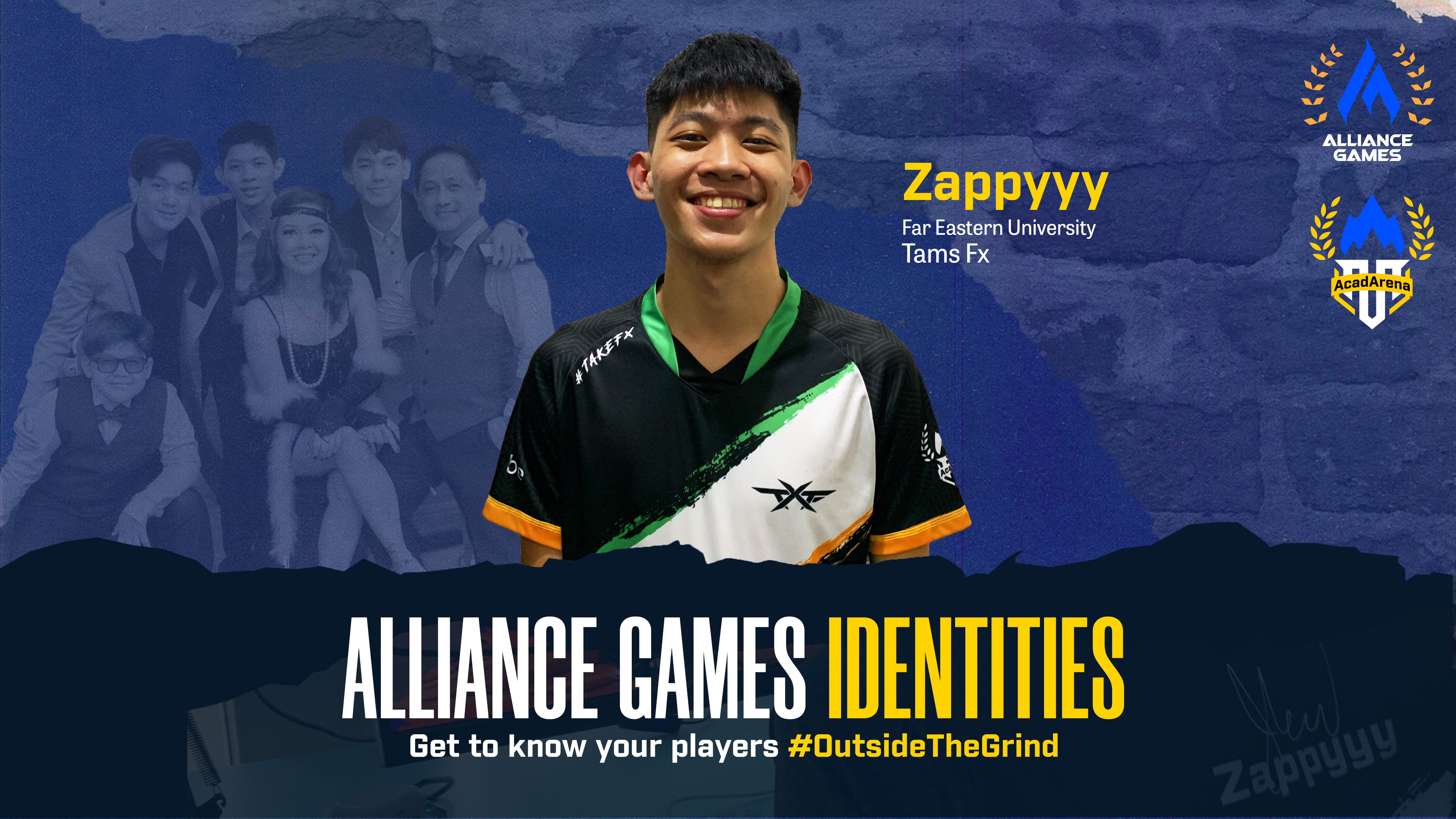 The family serves as the closest and most influential people whose support gears a person towards their journey in seeking their lodestar of hope. Breaking stigmas about life that revolves around gaming starts within the bounds of one’s own home.

Many players share the same stories when it comes to the hardships of facing their parents’ disapproval of their chosen course – taking on gaming and esports.

(I want to prove to them that we are not just playing to waste time but to show them that I can achieve something through gaming.)

Zappyyy is a Valorant esports athlete who represents FEU’s esports team, Tams FX, in the Alliance Games and other campus-gaming tournaments.

An enthusiastic person who started playing in his family’s computer shop at the age of four, Zappyyy knew very well he wanted to shoot for higher ranks as the years went on for him as a young gamer.

What started as a hobby in a computer shop in Bulacan turned into a dedication to the grind through a #NotJustPlay mindset.

According to Zappyyy, his family works within the borders of being business-minded, which is why they also want their children to follow the path towards pursuing business careers.

Through the influence of his parents, Zappyyy took Internal Auditing as his college course and he is set to graduate next year.

(I’m also business-minded like my parents but I don’t set aside my passion for gaming. In everything I do, I find time for it.)

Although there were many factors that contributed to Zappyyy’s current success, there was also an abundance of hurdles that left him almost questioning whether or not he should stop grinding.

When asked about how his parents viewed his gaming career, they once stood firm in their decision to disapprove of their son’s efforts.

(Whenever they used to see me play, they always tell me stuff like ‘you’re not gonna gain anything from that, you won’t get rich there, you’re wasting electricity’ stuff like that.)

(There were times they would turn off the wifi router while I’m in game and throw sermons at me like ‘it’s already dawn, why are you still playing?’)

It may have been a relatable challenge for gamers who stay up all night, but all those did not stop Zappyyy from being consistent.

He finally wanted to think of a way to convince his parents that there is something worth proving in what he loves doing.

(Maybe they got used to it. They abandoned all the stuff they used to tell me and thought ‘fine, maybe his hopes for gaming will lead him somewhere’ until I joined Tams FX. That was the convincing stage for them.)

They eventually turned supportive when they saw how Zappyyy played and won games to represent one whole school in campus-gaming tournaments.

(They started watching my games! This was the most exciting moment for me.)

Being his brothers’ lead in a family of gamers

Zappyyy is the eldest among his three brothers who also happen to be gamers, each with their own gaming PCs.

Next to him is JM “Scottie” who plays for De La Salle University’s “Viridus Arcus,” followed by JP “Tac0o” who plays for Mapua University’s Mapua Gaming Society, and their youngest 10-year-old brother, Julius “nathandayeetman” who grinds Valorant just like his brothers.

(When I was still the only person who played for collegiate tournaments, my siblings got inspired by what I did and told me ‘What you do is so cool – representing your school in esports tournaments.’)

And so, they started applying for the teams they are part of now as soon as they were eligible for collegiate competitions.

As of now, the biggest tournament that Zappyyy has played for and his brothers hope to play for one day is AcadArena’s Alliance Games.

Zappyyy even mentioned that even his parents were gamers before they got married and started a family. His father used to play Counter Strike back in the day with many of his friends.

When asked about ever feeling distant towards his family due to grinding his games, he said that he always makes sure to make time for his family and he never once felt left out.

Zappyyy’s parents used to restrict him from joining tournaments that happen on weekends but ever since they saw him play games on the national scene, they started allowing him during family days.

Apart from bidding them good luck, Zappyyy’s parents also share their support through posting photos of their children’s achievements, tournaments at home, and their computer set-ups.

(Family bonding for us is still very important. It’s the one thing our parents don’t want to lose from us. We’re all still close to each other and we’re open to telling each other our problems.)

Zappyyy was keen on saying his passion for gaming will never fade.

Aside from pursuing business careers after college, he will also stick to his dream of owning an esports organization in the future.

(The reason I want to start my own esports organization is because – even if I get old and won’t get to play games anymore – I can still be part of a community of gamers.)

According to him, he was able to foresee where he is now years ago. All he did was to think of a way to achieve it.

(Looking back at my past struggles when it comes to gaming and looking at what I have achieved now, I’m thankful I did not give up no matter what challenges came.)

Got an #outsidethegrind story you wish to share? We would love to hear from you!

Just fill out this form: